If you’ve ever tried whipped browned butter (or un-whipped), you know that it’s just about the best-tasting thing on the planet. If you’ve never tried browned butter you’d better get on the butter train. We’re going for a ride!
Yeah, plain ol’ butter is tasty, but taking a little bit of 30 minutes to heat it on the stove into a golden, nutty, smooth, sexy type of butter is where it’s at!

What is browned butter anyway?

Butter is made up of fat, protein, milk solids, and water. If you heat butter, what will happen to the water? It will evaporate. After the water evaporates, the fats and milk solids have to do something in there.

Fry up those milk solids!

When frying food, the oil heats up to a temperature in which it will bubble and fry foods to cook them and make them super tasty. This is the same thing that happens to the milk solids in butter.
Once the water evaporates, the temperature will rise and start to fry the little bits of milk solids in the oil. Fry them to a nice golden brown and they turn into something magical. The taste infuses into the oil as well, giving it a rich, slightly nutty taste.
In this process, because there is no water left in the butter, it won’t spoil as easily. So it becomes shelf stable. I leave mine in the pantry at room temperature for weeks and it’s fine.

Unfortunately, no. Because the milk solids are at their maximum browning point, if you heat them up much more they could burn. And burnt butter is not what we’re going for here.
But there is a solution! Strain those browned bits out of your butter when it’s still melted, and you’ve got a high-heat oil, infused with a slight browned butter taste. How ’bout that?

Use a candy thermometer for no-brainer results!

You don’t absolutely need it, but if you have one, use it! This streamlines the process so you don’t really even have to think. Just watch the temperature, stir occasionally, and when the butter reaches 140ºF/60ºC, take it off the heat and immediately put it into a container. The temperature will keep rising a bit, and you don’t want it to burn. Again, burnt butter = bad. Browned butter = good.

If you don’t have a candy thermometer, don’t fret. Just keep an eye on it. When you see the bits at the bottom turning golden to dark golden brown, take it off the heat.

To whip or not to whip, that is the question.

Whip it good! Okay, it doesn’t have to be whipped, but who doesn’t like whipped butter? One reason I like to whip my browned butter afterward is because if you just put it in a container, the browned bits sink to the bottom. I’d rather have them dispersed evenly throughout. All you need for this is a hand mixer.

(I don’t like to wait to whip it because it takes forever to solidify, so here’s my trick)

This browned butter can be stored in a cool, dry place for about a month (if it lasts that long)
1
FacebookTwitterGoogle +PinterestLinkedinTumblrRedditStumbleupon
previous post 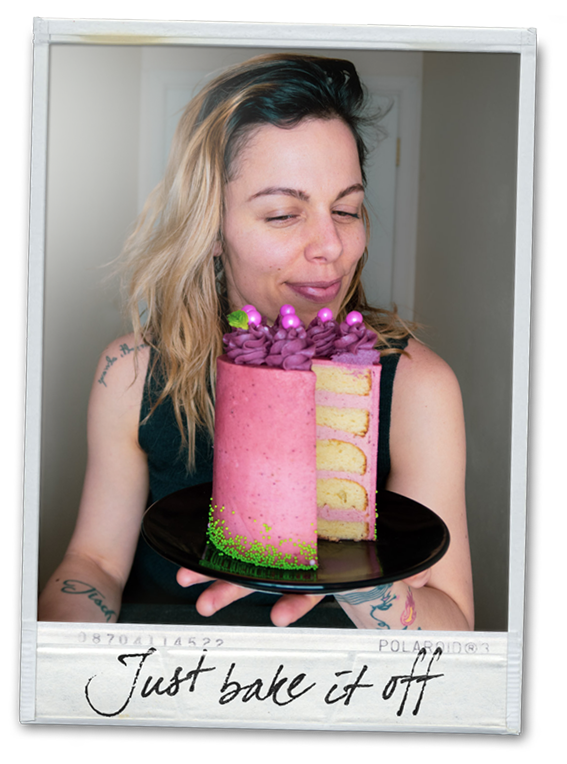 When I moved into an apartment with a very small kitchen, I wasn't sure how it would work out. My passion for food and cooking just got bigger, and over the years I learned how to use what little space I have to make some tasty treats. Now I'd like to share my recipes —and my journey — with you.

Baking is my jam. I love it with a passion.
I hope you find my recipes and tips helpful, and I'm so happy to be able to share my passion with you!